Busca Corp announced today that on Sunday July 19th Levelup.com –www.levelup.com) our flagship site and an integral part of the Busca Corp Network — has cracked Alexa’s Top 2,000 sites in the world. With over 10 million total network page views, Levelup.com has transformed into one of the top sites in Mexico and Latin America.

“The growth of Levelup.com is a testament to the 60 Billion Dollar Video Game market,” says Ramon Toledo, President of Busca Corp Media Network. “Through our partnership with Prodigy MSN we are well positioned as the #1 Video Game Site for the Latin American and U.S. Hispanic audience.”

Prodigy MSN is the most popular website in Mexico with over 23 million users and features a wide array of world-class services, such as Windows Live Hotmail, Windows Live Messenger, as well as video, news, and the latest in entertainment, lifestyle and sports. Our partnership aims to target the rapidly expanding video game user base which in the 1980’s meant mostly males under the age of 20 but today includes both male and female gamers under the age of 35.

Levelup.com publishes user-generated video game content alongside professionally produced media content that offers tips, strategies, reviews, comments and a place to share experiences with a fully engaged online community. With its unique platform, Levelup.com has experienced strong and steady growth since its launch in 2007.

Levelup.com also recently entered, and is aggressively attacking, the U.S. Hispanic Market and, is opening a largely untapped demographic with huge potential. 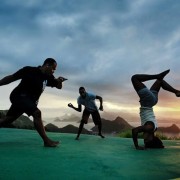 The meaning of gestures: body language in Brazil

First Latino Pope Francis I: History in the making
26 replies