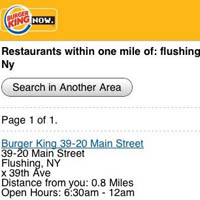 Burger King teamed up with Gomobo and PointAbout for the development and design of the application. The Burger King NOW location-aware iPhone application is currently being tested in the Queens, New York, area.

“The idea of the iPhone app is to go the full nine yards with a rich mobile ordering platform,” said Noah N. Glass, founder CEO of Gomobo, New York. “This is the first case study that we have done with an iPhone application and we expect to launch these types of applications for other quick-serve restaurants we are working with.”

Gomobo helps fast-food and restaurant chains mobilize their services via mobile Web sites, and now through iPhone apps as well. Clients include Subway and Dunkin’ Donuts.

Burger King, the nation’s No. 2 burger-and-fries chain after McDonald’s Corp., has been known for its innovation with new technology, including its highly viral Subservient Chicken online viral marketing campaign earlier in the decade. Ordering and paying through the iPhone application is part of that DNA.

The iPhone’s GPS functionality lets users skip the step of entering in an address into the app. Instead it automatically finds the Burger King location closest to them.

When users place their order and come in to pick it up, they can skip the line and just grab their food, since they have paid for it via the app.

The application also tracks and saves order history and then acts as a loyalty card by offering incentives and deals. 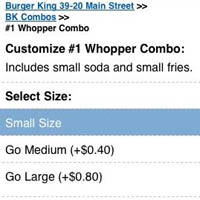 The goal behind this application is to drive incremental same-store sales – a key metric for the restaurant industry, Mr. Glass said. He also said that orders placed via the application have been 25 percent larger than in-store.

When customers start using the service, they increase their frequency of visits by 42 percent and the mobile offering takes existing loyal customers and increases their value by 75 percent.

The application is helping Burger King drive additional sales, since new customers can discover the stores near them that they may have not known about previously.

In terms of security, the application is fully secure. So, customers don’t have to worry about their credit card information being misused.

Also, the information is stored within the application, so that it doesn’t need to be re-entered each time the customer places an order.

When picking up their food, customers just need to give the last four digits of their mobile number, to confirm they are in fact the person that placed the order.

PointAbout helped Gomobo develop the application. It took the guts of the Burger King mobile site, which was developed by Gomobo, and poured it all into an iPhone experience.

Also, PointAbout made it possible for the application to remember the phone ID and allowed it to pull GPS information.

“The mobile device allows them to extend where transactions take place and let customers make transactions from anywhere, therefore extending those four walls to the consumer’s hands,” he said. “It is also a much more efficient way of taking an order and the payment.”
Source: Mobile Marketer